I have a mailing list (which you can join!) and two weeks ago, writing my lovely subscribers, I said, “And I don’t intend to write more about Ninety One in the next couple weeks unless the guys do something new.” When I write to my lovely subscribers this week I will say, “And I don’t intend to write about Irina Kairatovna in the next couple weeks even if they do something new, because I am WORN OUT trying to deal with all the music video symbolism and flying historical and cultural references.” (And at the risk of wearing y’all out in turn, I’ll go ahead and say that this blog post may make even less sense if you haven’t read those two posts already.)

Thus my first reaction to “Wu Kang” was to collapse: 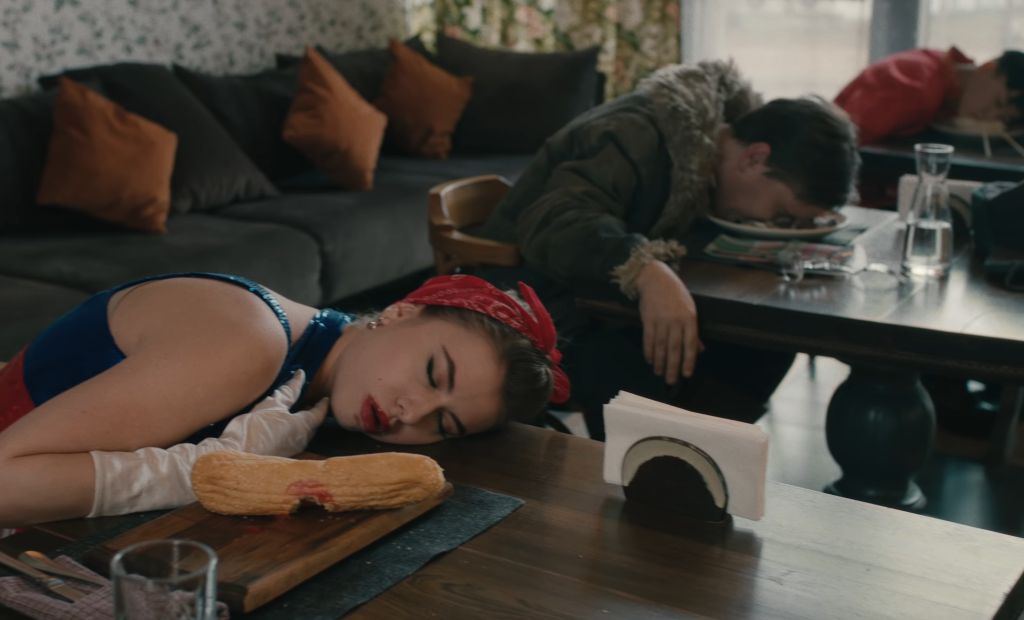 That American woman in the forefront? That is me. Kuka—yep, he’s the director, again—has my number. I am corrupt, and corrupting, and hereby slain by all this Kazakhstani satire.

Let’s see if we can get through this together. 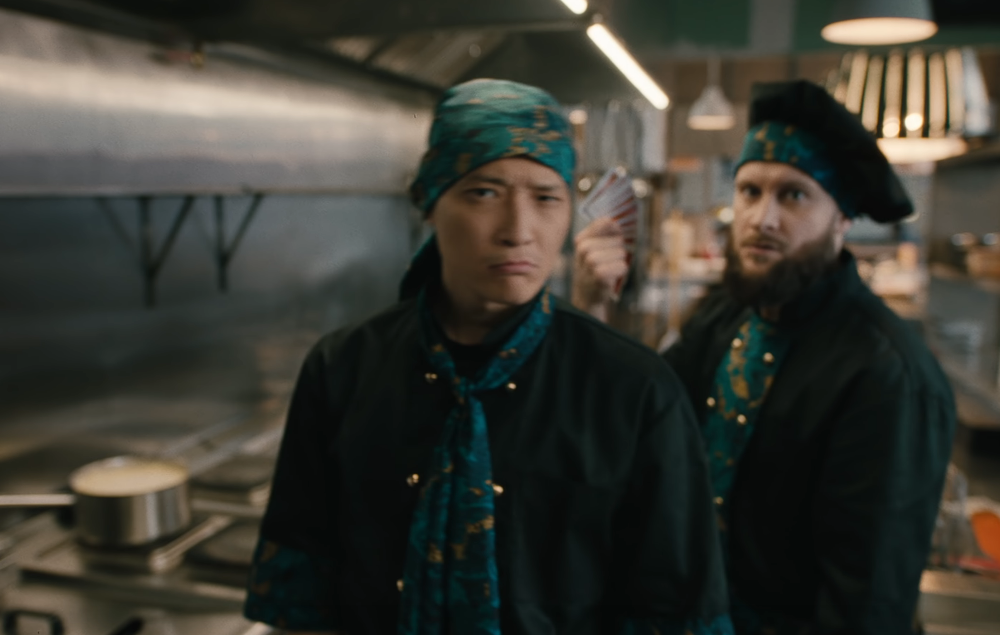 The framework of the video story is Ilya and De Lacure (about whom I know nothing, other than that his range of facial expressions is excellent) as rival cooks playing cards: their cards set up the other sequences. Note that both of them are in black but their scarves and the trim on their uniforms are in the blue and yellow of the Kazakhstani flag. They are playing for the SOUL OF KAZAKHSTAN. Kuka is not messing around.

The first sequence features Aldiyar initially in traditional Kazkah (I assume?) dress, accompanied by a traditionally-dressed wife, but then the evil American appears: 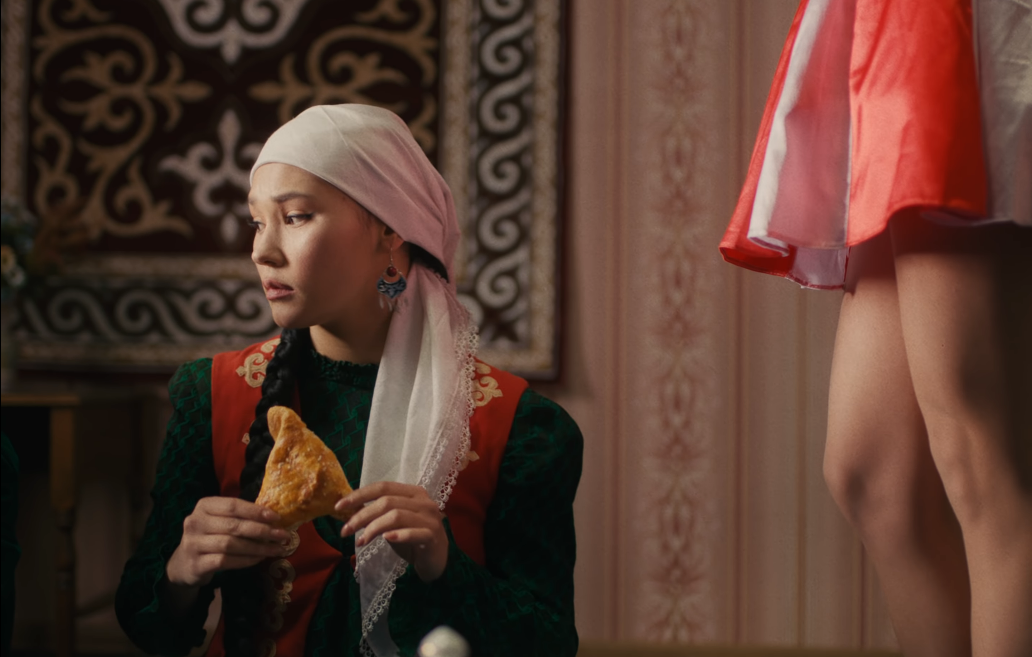 Speaking as a native-born evil American, I am still not sure what, exactly, the corrupting food is. A samosa? Is part of the evil American’s evil doings cultural appropriation, so that a food that apparently originated in Central Asia but got popular in India is passed off as “American”? That would be subtle, and subtle does not seem to be Kuka’s aim in this video, so I’m going to stick with my second guess, which is that it’s one of those dry scones from Starbucks.

Anyway, the demure Kazakh wife eats the samoscone and immediately transforms into a twerking dancer in a bikini and three-inch heels (shout out to this dancer and her impressive stability in three-inch heels), and after a moment’s hesitation Aldiyar also throws off his traditional clothes for a fur coat and sunglasses. 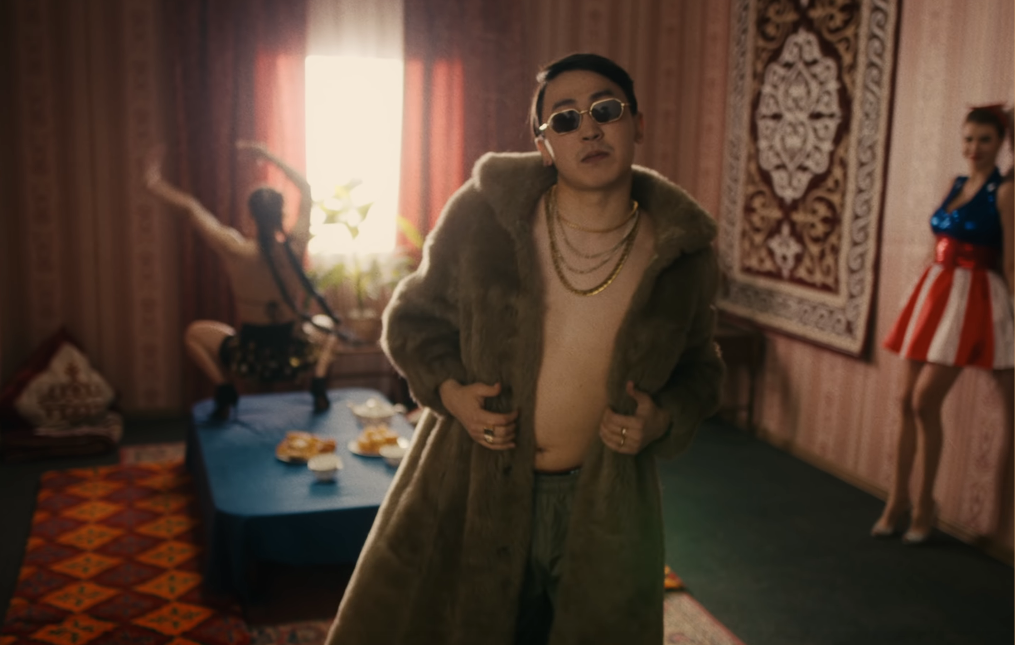 This is all meant to suggest that America has seduced Kazakhstanis into crude displays of sexuality, though I also suspect it reflects the IK guys and Kuka having exchanged enough notes with Ninety One and Yerbolat Bedelkhan to decide that male shirtlessness is a good addition to music videos.

In the second sequence, rapper Hiro, who has collaborated with IK before and that is the sum total of what I know about him, goes to bowl-cut Chinese for gambling money, and when he goes to pay it back, the bowl-cut Chinese reveal their interest rates: 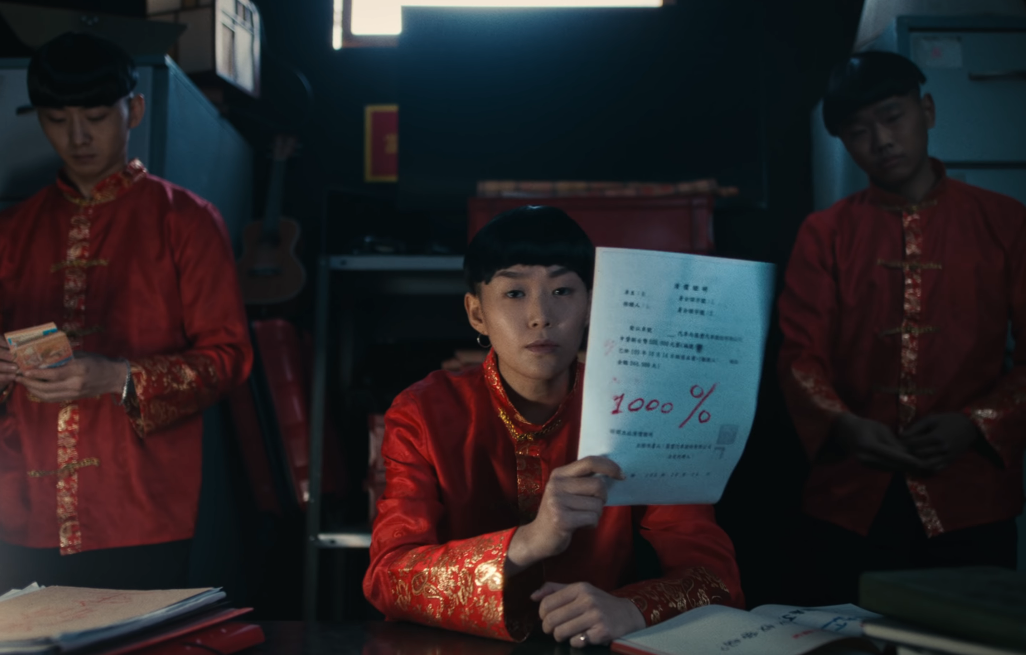 Consider this IK’s contribution to the debate over whether “debt-trap diplomacy” is a fair accusation. Also their contribution to what you can and cannot get away with implying about Chinese treatment of Kazakhstanis: 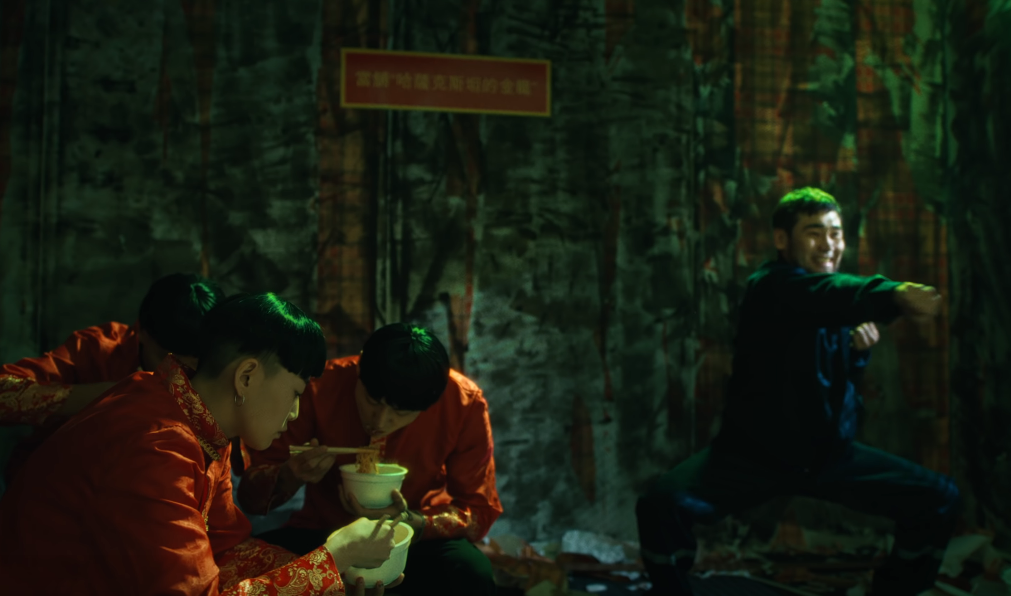 Note that, unlike in the video for “5000,” nobody gets shot; this is pretty tame. And without being able to read the sign I can’t give you any context for where Hiro’s forced labor is supposed to take place. But I’m still inclined to read this as IK and company saying, “So, about Xinjiang…”

On to the third sequence, where Kuka, apparently bored by this point, sets himself the challenge of making Azamat look unattractive. 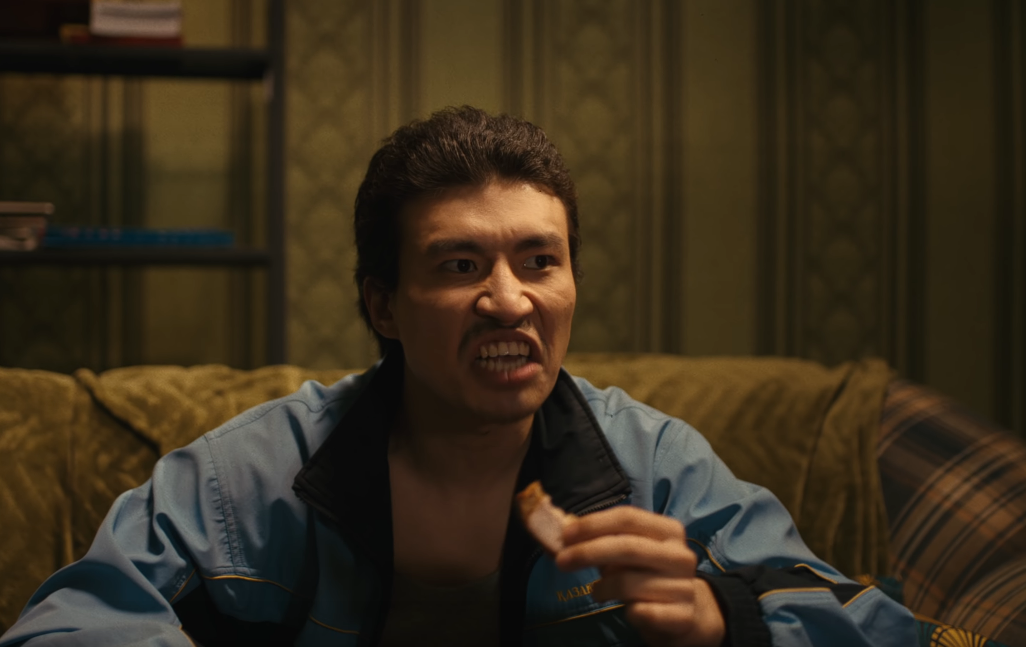 (Side note: apparently this particular Azamat’s nickname is “Mark” [from his last name, Marklenov], which I might start using if only because there seem to be a lot of Azamats in Almaty’s music-and-entertainment industry.)

Azamat-slash-Mark is shown yelling onscreen to a Russian politician, who then comes to his apartment. If the Americans corrupt with vulgarity and the Chinese corrupt with straight cash, the Russians corrupt with alcohol and supposed commiseration: 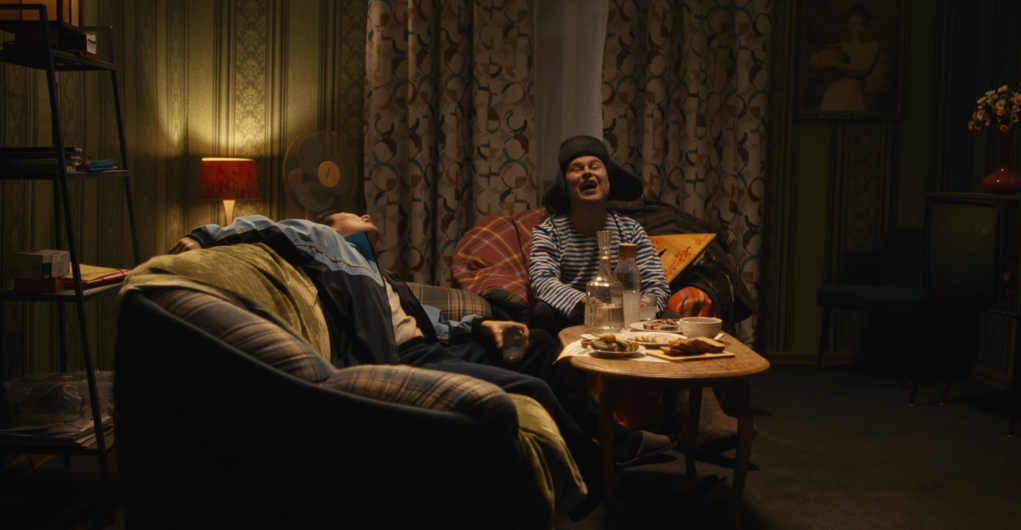 All this time Ilya and De Lacure have been literally eating a Kazakhstan-shaped cake, because we may have missed the point earlier: 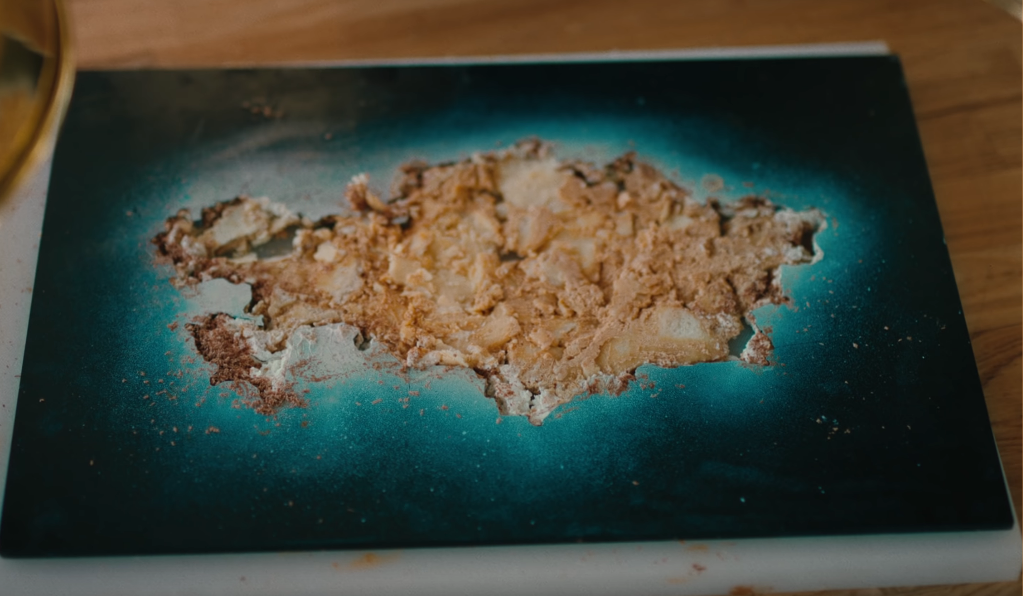 I actually don’t know what the cake is made out of. There is a lot of food-based symbolism in this video and it is all flying over my head. When the American, Chinese, and Russian avatars enter Ilya’s restaurant, he makes them each a dish symbolic of their own national cuisine: the Chinese avatar gets rice, the Russian avatar gets… some dish a more knowledgeable person than myself would be able to identify (oladyi, maybe?), and the American avatar gets what to me looks like a meatball sub but I have been told is actually supposed to be a hot dog. (The invaluable Sara pointed me to a detailed YouTube comment left on the video, which in turn pointed out that the restaurant sign at the beginning of the video lists “Restaurant Wu-Kang: Hot Dogs, Rice, and Vodka.”) 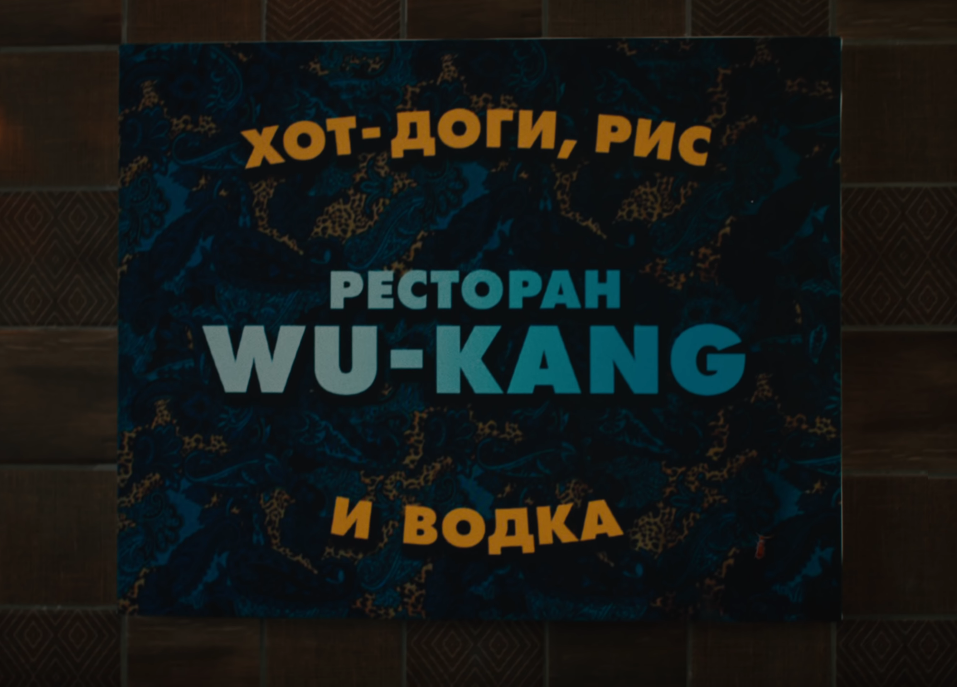 (If Kuka had come to me for symbolism advice I would have requested that the food symbol of American decadence be a Philly cheesesteak, but that’s neither here nor there.)

Anyway, Ilya poisons all the avatars, they keel over, and then we cut to the earlier dancer standing in for Kuka, with similarly bikinied assistants: 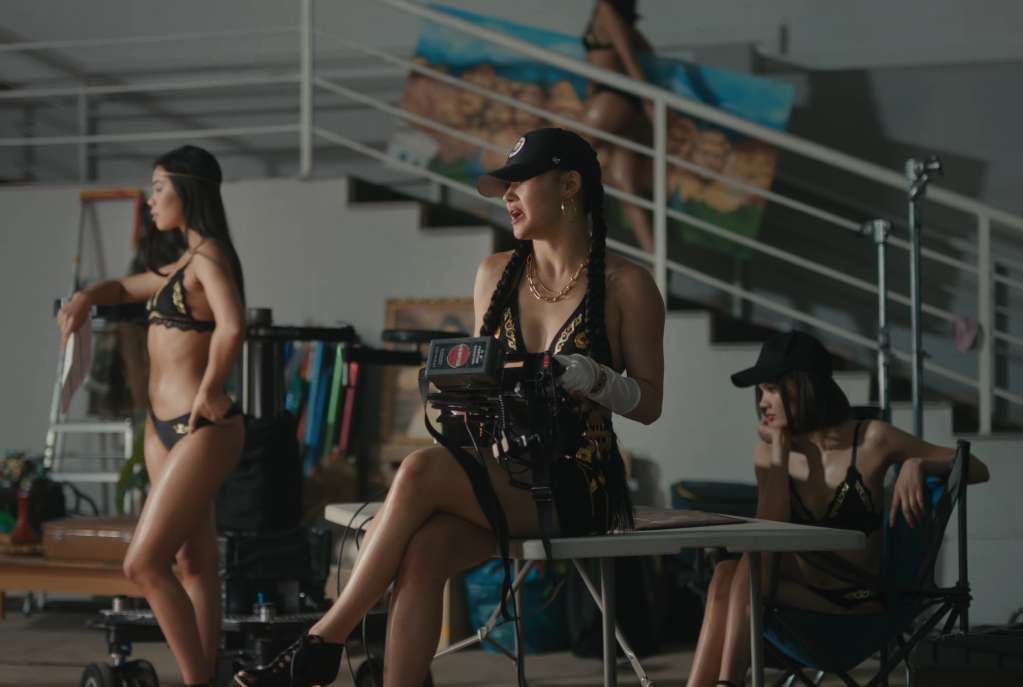 This is the one part that’s still a little opaque to me. Either Kuka et al. are suggesting that they, themselves, remain corrupted by the West, and this entire video is in fact impossible without Western (specifically American) corruption, or they’re suggesting that Kazakhstani women know what’s up and maintain their dignity and agency even when they get put into bikinis, or that Kuka thinks that bikinied dancers are even more valuable for music videos than getting his friends to take their shirts off, or all, or none of it.

The more easily read symbolism is that all the performers then get together for a communal meal, complete with ending prayer (which the group who did the Feya Perizat roundtable also concluded with): 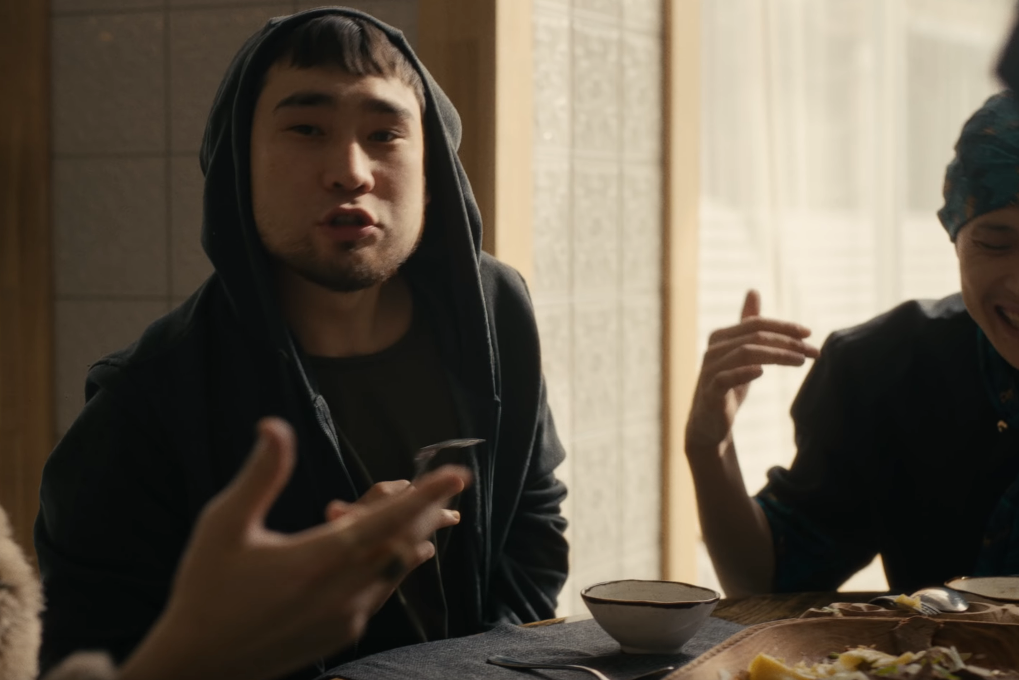 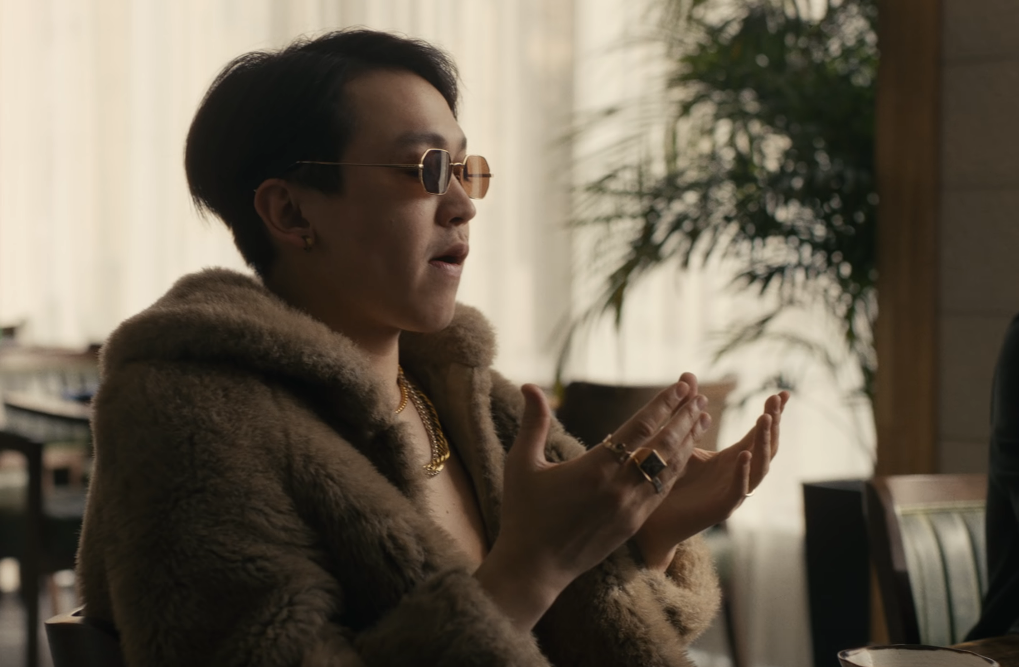 Note that Aldiyar, like the bikinied dancer, hasn’t changed back into his traditional clothes: he’s participating in this soul-warming moment of Kazakhstani community-building without completely shrugging off Western influences. Which is absolutely what you would expect to see from a group that may be taking its inspiration from Alash, which, as we talked about in the Ninety One Series, was at least in part about not rejecting Western influence entirely but blending worthy Western ideas with undervalued Kazakh traditions.

Oh, and all of this is in the service of a song. As for the song: I don’t love it as much as I love “Taboo.” “Taboo” had four rappers and three singers and managed to be more compact, plus feature Bala treating the word “propaganda” like it had a chewy center. This one drifts a bit: the beat in the background doesn’t vary that much, and with the exception of Mark, nobody’s doing a lot to distinguish their voice. Without the music video to decode I don’t think the song would have held my attention as well.

Also I have the disadvantage of not having a lyrics translation to give you. The closest I can get is this transcription, which suggests that the lyrics consist of Russian and Kazakh, and also swearing, and also a loooooot of Mortal Kombat references. What IK think the Wu-Tang Clan and Mortal Kombat have to do with Kazakhstan recovering from the ruin foreign influence has tempted it into, I am not the person to explain. (The line the bikinied dancer mouths is “Все я думаю, есть, ну давай закрепим,” which Google Translate says is, “I think everything is… well, let’s fix it.”)

On the continued theme of How Political Are These Guys Being, Really, it’s again hard to say without a translation, but here’s my best guess right now: on the one hand, blaming the United States, China, and Russia for Kazakhstan’s problems lets the current Kazakhstani government and the Nazarbayev regime more broadly off the hook. On the other hand, since the Kazakhstani government spends a good deal of its time talking the country up as a good spot for foreign investment (in particular to all three of those countries), complaining about too much foreign influence is a good way to criticize the domestic powers that be without crossing any overt lines.

At any rate, consider this analysis both overlong and incomplete. And if you like groups that employ lots of satire and video-game samples, or groups that feature gravelly raps from good-looking men named Azamat, IK is worth your time. “Wu Kang” is off their album 13 Выпуск (“Issue 13,” suggests Google Translate), which Spotify says it got in October. Hopefully they don’t have plans to release any more singles for at least a week or two. I need a damn break.