Since a lot of this review is going to be about the non-musical aspects of “Taboo,” let’s start with the musical aspects, since in all honesty I judged “Taboo” the best song off the 91 EP before ZaQ started rapping, let alone before I’d seen a translation of what he actually said. (The translation I’m going off of is once again supplied by the wonderful Didi.) First of all, there’s an actual beat acting as a floor for everyone, which fades in and out intermittently and occasionally gives way to a lighter touch only to make a triumphant return for Bala’s part. (“Taboo” also made me slightly nostalgic for Alem and Bala’s throw-every-beat-at-“Su Asty”-and-see-what-sticks approach to songwriting during the Qarangy Zharyq era.) If you hate drum machines, this song isn’t for you, but that’s true of Ninety One’s entire discography; I’m perfectly happy with the artificiality, honestly. And speaking of artificiality: Bala’s part is processed six ways from Sunday, which is also par for the course at this point, and yet he manages to sound emotionally invested, which is not par for the course (“JJBSQ” being another exception to the rule). Also I could listen to Alem and Ace harmonizing on the chorus all day.

aaaaaaaaand now we’re done with the easy part of the review.

Look, I’m weird. I keep telling y’all this. You tell me that Ninety One has released a song which includes references to Orwell, Huxley, the fallen tenge (again), and Oyan, Qazaqstan! (again, possibly, though that depends on my reading of their past references to Alash being right), and I will predictably flounder in a wave of feels. That doesn’t mean anyone else, Eaglez or not, counts it as fanservice. It does mean you should take any commentary I might have with a couple tablespoons of salt at least. The problem is not just that this is my catnip but that I am very badly positioned to judge how political the political commentary of “Taboo” actually is.

To back up a bit: Irina Kairatovna is a comic performance collective turned rap group of varying membership, which apparently got started by going to KVN, an annual comic competition that’s been going on since 1986 and brings in Russian-language entrants from all over the world and is one of those Russian institutions the average American knows absolutely nothing about. (To make a not-totally-accurate cross-cultural comparison, you could describe someone as a KVN alumnus similarly to describing an American comedian as a Second City alum or a mid-20th-century British comedian as a Footlights alum. One KVN alum, by the way, is currently president of Ukraine.) It’s not entirely clear to me how many people are in IK at this point beyond the three rappers, who are, in order of their “Taboo” segments, Ilya Gumenny (Гуменный Илья), Aldiyar Zhaparkhanov (Жапарханов Алдияр), and Azamat Marklenov (Маркленов Азамат). Also there’s a man named Kuanysh Beisekov (Бейсеков Куаныш), who goes by Kuka. If that name sounds familiar, it’s because Kuka directed the “Señorita” video.

He also directed this:

Let’s do a quick recap, since there’s a lot more going on in the “5000” video than in the “Taboo” video (though give proper credit to the idea of Alem as the conciliatory politician whose attempt at a handshake gets ignored, Bala and ZaQ wearing matching teal jackets, and Bala pairing said teal jacket with a T-shirt that says WEIRD AS HELL). “5000” opens with Azamat getting beaten and shot, then transitions to a scene of extras, with costumes from different historical periods, lying apparently dead in stacks; the IK guys then spend most of the rest of the video in suits pretending to be corrupt, murderous bureaucrats, except when they’re rapping and then getting shot by their corrupt bureaucrat alter egos. Also there’s a fake Lego set, which is a hilarious idea (and I very much want to know what’s going on with light rail construction in Astana), and a final montage of bureaucrats made up in the shape of Kazakhstan, which is then blacked out and repainted in white by Ilya.

Also, remember how I made a fuss in Part 10 of the Ninety One Series about the picture of the Alash group in Ninety One’s “Men Emes” video? That picture shows up in the background of “5000” as well. Also also Azamat finishes the video wearing a sweatshirt that says ALASH. (Which you can buy for yourself.) Also the “5000” video has more than eight million views, which to my knowledge (which, remember, is not very good) is quite high, and Marat Oralgazin, an entertainer and talk-show host, is apparently a “5000” fan. 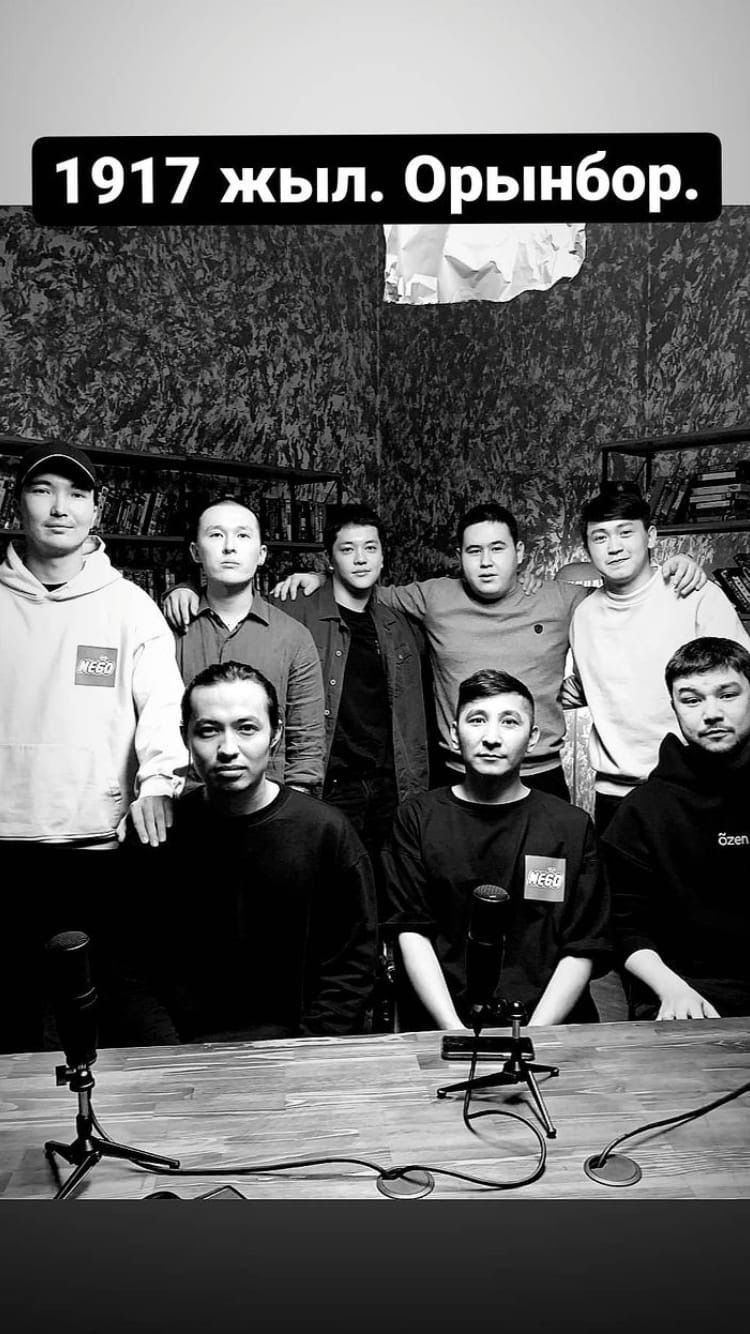 If the Primer Qpop post is accurate, this is for an upcoming podcast, whose participants will include Ace, ZaQ, IK’s Aldiyar, and the Feya Perizat interviewer. The caption says “1917. Orenburg.” Orenburg is a Russian city not that far from the Russia-Kazakhstan border (it’s about four hours by car from Aqtobe, Bala’s hometown) but it is also the place where, in 1917, the All-Kazakh Congress established the Alash Autonomy, the short-lived independent state that gave way in 1920 to a Soviet republic. In other words, this group of podcasters seems to be positioning itself as Founders of Homegrown Independent Kazakhstani Democracy 2.0.

(Update 19 February: Or I’m way off track and they’re poking fun at their own self-seriousness. See this post for more information.)

Here’s the problem: obviously the dudes are getting political. But how political? And to what end? Both “Taboo” and “5000” were released right before Kazkahstan’s most recent parliamentary elections, which were about as free and fair as you would expect elections in the Nazarbayev era to be, in other words not at all. You would think such a heavy-handed regime would be less than happy with a bunch of rappers running around constrasting past Kazakhstani patriots with current murderous bureaucrats. And yet, while the Oyan, Qazaqstan! folks are getting detained and harassed, Ninety One and IK seem to be sailing along with no obvious blowback whatsoever. The Kazakhstani state seems more disturbed by the application of guyliner than it does by being called Orwellian.

I’m low on context. A new friend who’s been following Ninety One sent me links to YouTube reactions by a Russian speaker to both “Taboo” and “5000,” but I don’t speak enough Russian to be able to soak in the additional context he adds. (I can sometimes get away with sticking the transcript into Google Translate, but that trick didn’t work this time.) A poster on the Kazakhstan subreddit described “Taboo” as “vague” and “slightly antiestablishment,” which makes more sense, to me, than the possibility that Ninety One and IK are speaking hard truths and going untouched because they’re entertainment celebrities—from what I’ve observed being an entertainment celebrity makes you less likely to speak hard truths, not more. But I can’t claim to actually know what a hard truth looks like in the Kazakhstani political context. I have no idea, if we get right down to it.

So it was inevitable that I was going to love “Taboo,” because it has sent me down this long rabbit hole of possible criticism and references back to homegrown democratic movements, and I love Ninety One most when they balance their idol-pop feints with inviting rabbit holes. Whether all this is actually going to help lead to a Kazakhstan with more freedom and more fairness, I don’t know and am very much not in a position to know. I shouldn’t flatter myself (and y’all shouldn’t flatter me) into believing I have enough knowledge to pass a judgment worth a damn. I can say, “Taboo” has a head on its shoulders. And a beat.