So I haven’t been posting here much. I’ve been busy. But I promised myself that when I got back to talking about individual songs, the first individual song I would talk about would be “Mama uryspanyz,” because if you like Kazakhstani male idol groups who (a) seem to have a fair bit more to say than the standard idol group, (b) do not feel obligated to give more than half a damn about choreography, and (c) somehow keep going in unforgiving markets, you’re going to love Moonlight. And then there will be two of us.

I kid, but only barely. If Ninety One’s English-speaking fandom is hard to find, Moonlight’s is hard to find with a microscope and a Kazakh-English dictionary in hand. The lack of consistent English subs is part of the problem–the only subbed Moonlight videos I know of, for a three-year-old group, are the music video for “F.U.C.K.” and that one time the nice folks at Qpop Translations subbed Ansat’s appearance on Zhauap Ber. But also: I don’t think this group has Ninety One’s resources, or even Mad Men’s. I don’t know what resources it does have. Ninety One has always had the benevolent (we hope) figure of Yerbolat Bedelkhan in the background, and if your knowledge of Kazakhstani pop music starts with Ninety One it can be hard to remember that Yerbolat Bedelkhan spent a good decade-plus establishing himself before he ventured out to form an idol group. If there’s a similarly connected and financially resourceful benevolent overload in Moonlight’s behind-the-scenes I haven’t seen him (it’s almost certainly him) yet.

And so we have an idol group whose ability to promote themselves has been sporadic at best. Yerkekhan posted a vlog at the beginning of the year but didn’t extend the concept past a single episode. Their main Instagram account apparently got hacked (it’s back now). They’ve facing all the challenges everyone trying to make a living singing and dancing in Almaty is currently facing, and if I’m right in my guess that the album on which “Ademi Gon” was supposed to appear never happened for financial reasons, they’ve been facing them for longer.

(I just realized I’m simultaneously talking all Obscure Group Is Obscure and assuming you know their names. Sorry. Yerkekhan, who I believe is the leader and main songwriter, has the “Mama uryspanyz” chorus; Azamat is the one who’s never allowed to button his shirt; Ansat takes the bridge; Rufat only gets to sing at the end, and has to hide his impressive ink under a sweater.)

What I love about Moonlight is that all the obstacles facing them seem not to have put the tiniest dent in their ambition. 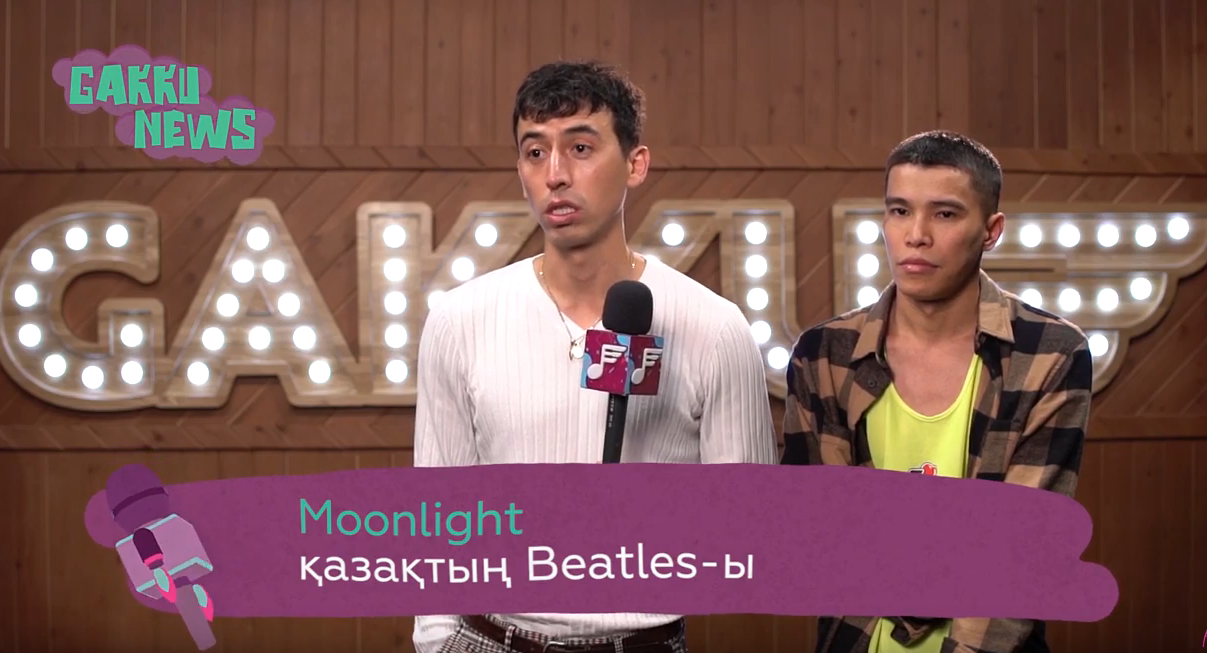 Kazakhstani Beatles? YES, you crazy underfunded dudes. GO ON WITH IT.

“Mama uryspanyz” does not scream ambition, admittedly. It feels funny and slight, an album track. (If Moonlight is the Kazakhstani Beatles, then maybe “Mama uryspanyz” is their “Rocky Raccoon.”) It’s apparently been around for over a year; I wonder if the video was borne of a screw-the-pandemic, let’s-do-something impulse that may have netted us the green-screen masterpiece that is the “Lie” music video. But at this point arguably just getting a damn video out counts as ambition.

Besides, it’s hard to fault something for being slight when it’s so charming. This has the same irreverent spirit as “F.U.C.K.” without the latter’s abrasive quality and lack of a melodic throughline. (The two singles in between “F.U.C.K.” and this are more conventional, and more boring.) I’m not quite sure why Yerkekhan seems to be channeling a used car salesman with his sections, but he’s bracketed by Azamat playing it straight, which helps a great deal. And Ansat deserves the extended spotlight he gets: his voice is textured enough to be fun to listen to. The video is dignified but un-self-serious; it fits the song.

(Also I should point out that I love how many women make Q-pop work in behind-the-scenes positions, and the video for “Mama uryspanyz” is no different, with Aziza Funky as director and Margarita Gorbacheva–who’s also worked with Madi Rymbaev and shot the cover photo for ZaQ’s DO LOT album–as principal photographer.)

(Also also, while I’m at it, Ansat ought to be better known than he is as someone who manages to be an attractive idol while not conforming in the slightest to K-pop-inspired attractive-idol standards.)

So I stand by the position I’ve held ever since “Tokyo”: Moonlight deserves more attention. If you are in the market for an indie-ish idol band, the kind that might reward you with Knew Them Before Everyone Else bragging rights, consider becoming their fan. And then do tell me, so we can cluck about this group being underappreciated together.